As part of DIY Garden Rachel just posted an amazing article on the much ignored topic of DEFORESTATION.

YES - this topic should HIT HOME - since every home - including yours and your family and children, every school, every sidewalk and road, and every city or farm is on previously forested land. Not anymore.

Rachel is also a great communicator, and does her homework by posting complete articles with all the relevant visual support and related videos.

Her article is available on:

How To Introduce Wildlife To Your Garden | DIY Garden

Deforestation may be defined as “the clearing or thinning of forests by humans” or as the “permanent removal of trees to make room for something besides forest.”

Forest degradation is a related term that indicates when a forest is no longer functioning as a healthy ecosystem: A degraded forest can no longer sustain populations the way it used to.

I an email-meeting I replied to her as follows with my first awareness on deforestation - other than playing with mud in PR after rains on deforested land:

"A story: years ago i took  2 week walks many times all over the island with a friend - escaping the city. sleeping next to the road. then once in the mountains (PR is 85% mountains) we met an old farmer. he explained to us that BEFORE THE ROADS were built there where a LOT of rivers, now only the large ones remain.
His story was that he saw when they built the roads (in the 1950's-60's) the tractors (bulldozers) displaced large amounts of soil/clay/boulders into the sides - and that buried all the smaller streams - that feed the larger ones.
Later on I saw that over and over - dormant rivers that became visible only after a heavy rain. Much damage of flooding in San Juan is due to hosing built in these areas...
So now PR is a tropical land with few living rivers and lots of flooding problems."
- raul
--- end of story

Where does deforestation occur? It’s a major issue just about everywhere, though the precise drivers and consequences vary by region.

As discussed above, many places in Europe have undergone severe deforestation dating back to the Middle Ages and intensifying during the Industrial Revolution and the World Wars.

You may have read recent news stories covering, for example, the thousands of fires burning in the Amazon Rainforest—the smoke can even be seen from space. Over the past couple of years, rates of deforestation in the Amazon have skyrocketed. People first cut and collect timber, then set fires to clear out vegetation and ready the land for agriculture.

In East African countries such as Uganda and Kenya, deforestation is largely driven by the demand for firewood, charcoal, and timber. Conservationists estimate that in the past 25 years, Uganda has lost over 60% of its forest coverage.

BELOW IS WHAT HAPPENS WHEN WE PRESERVE THE FOREST: HAS THE YOSEMITE AND REDWOODS PARKS THAT ATTRACT MILLIONS TO THEIR STATE TO VISIT AND LIVE AND WORK THERE.

A HUGE ECONOMY - THE 6TH IN THE WORLD THAT HAS BENEFITED FROM CONSERVATION OF THEIR BEST LANDS. YOSEMITE PARK - SAVED BY JOHN MUIR AND MANY THAT FELL IN LOVE WITH THIS STUPENDOUS RANGE OF MOUNTAINS... THESE TWO IMAGES ARE ABOUT GLOBAL WARMING/CLIMATE CHANGE: IGNORANCE OF THESE EVENTS AND THEIR HUGE EFFECTS TO COMMING GENERATIONS AND LOW-LYING ISLANDS AND COASTS: THEN PREZ. D. TRUMP SKIPS THE WORLD CLIMATE CHANGE G7 MEETING. IGNORANCE OF THE FACTS BY PEOPLE LIKE THIS IS AN ISSUE. FIRES IN BRAZIL - AND THE RESULTS BELOW: 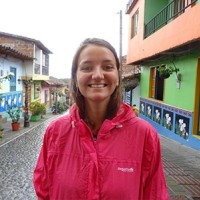 Growing up on a farm in Buntingford, I was always close to nature. The animals, the crops, the great outdoors; it really was nature’s playground to be enjoyed for any young child.

I could tell back then, my life wasn’t going to revolve around busy city life or a traditional office job. I knew I wanted to work with nature in some capacity.

Fast-forward a few years, and after getting a Horticultural degree at the University of Edinburgh, meeting my husband, and having two wonderful children, I returned home to Buntingford to write, work and enjoy my old stomping grounds.

As well as bringing up a family, I work in my local garden centre, grow crops on my allotment, and share my knowledge and ideas with the wonderful readers of DIY Garden!

Just like my summer strawberries, life is pretty sweet!

Her many posts are found here: